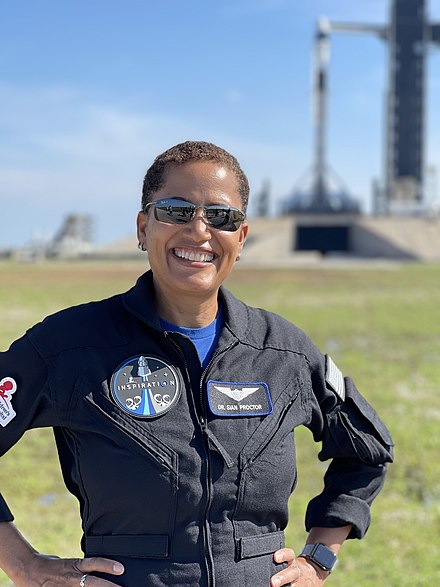 Astronaut inspires children with story of her path to space

An astronaut who will go into space on board a special SpaceX expedition later this year inspired children who are attending an Astronaut Job Camp hosted at SaxaVord Spaceport.

Dr Sian Proctor told 80 young students how she will be the first black female pilot of a spacecraft when the SpaceX Inspiration4 mission, scheduled for September, lifts off from Kennedy Space Centre’s historic Launch Complex 39A, the embarkation point for NASA’s Apollo and Space Shuttle missions.

Astronaut teacher Mike Mongo, who is running the job camp for 10-12 year olds with support from SaxaVord Spaceport, will be part of her ground-based team.

Dr Proctor also related how she overcame the disappointment of narrowly missing out on becoming a NASA astronaut 12 years ago.

A geologist whose hobby is art, she will combine science and painting – using a special brush and palette – on the mission.

She said: “I’m really excited to share my space2inspire story. I remember when I was your age really loving exploring and wanting to be an astronaut, looking up at the stars at night.

“Now I am getting the chance to go to space. I’ll be the fourth black woman in space and the first black female pilot.

“You have to imagine yourself doing the things you love and being able to do them in space.”

Dr Proctor was born in Guam, in the South Pacific, where her father Edward Langley Proctor Jr was working for NASA on the Apollo space programme.

She grew up surrounded by Apollo memorabilia, including a note to her father from Neil Armstrong thanking him for his help on the Apollo 11 mission.

“I grew up with this love of exploration and space and aviation. I’ve always wanted to be an astronaut and I really wanted to be a pilot when I was a kid.

“But I ended up getting glasses and wasn’t sure if I’d ever fly because back then you had to have 20:20 vision to become a pilot.

“I became a geo-scientist and eventually got my pilot’s licence at the age of 35.”

A friend encouraged her to apply to become an astronaut, and in 2009 she made the top 47 places out of 3,500 applicants, but unfortunately was not chosen as one of the 10 astronauts that year.

“That didn’t deter me from my goal of becoming an astronaut,” she said. “Applying was a life changing experience – and you just have to keep moving forward, visualising yourself going into space.”

An inspirational video that she made making the case for going into space, including the narration of a poem she wrote on the topic promoting justice, equity, diversity and inclusivity, secured her the spot on the SpaceX mission.

The three-day mission, in a Dragon capsule with the capsule docking adapter replaced with a domed glass window allowing 360-degree views, will launch on a SpaceX Falcon 9 rocket.

A total of 180 children are attending the Astronaut Job Camp hosted from Unst and supported by SaxaVord Spaceport and its investor Wildland throughout July.