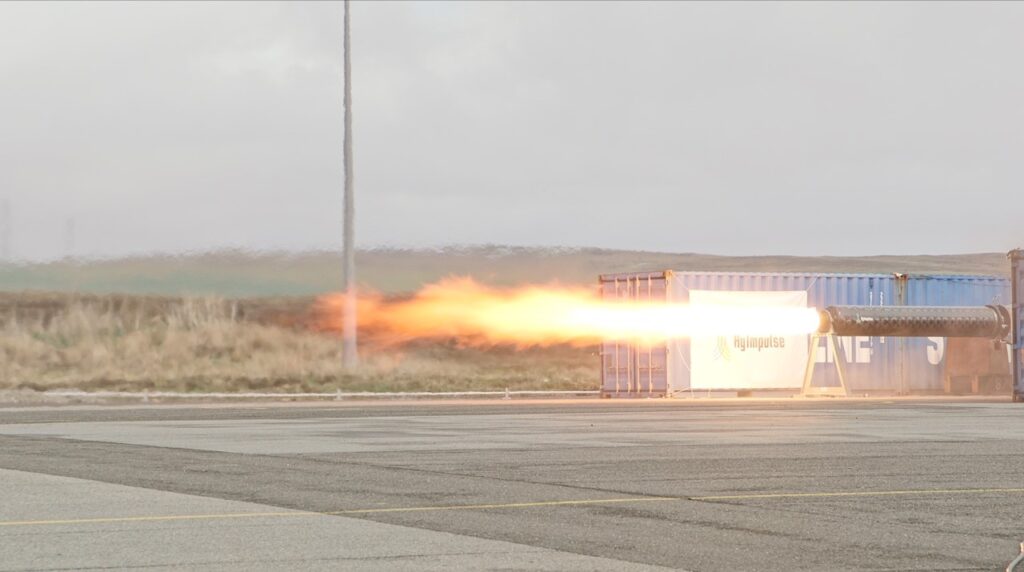 German rocket maker HyImpulse Technologies has successfully carried out a series of engine tests in Shetland this week.

The company was quick to praise companies in the local supply chain which supported the work, hosted by Shetland Space Centre at the former Scatsta airfield. It is expected to culminate in the launch of a sounding rocket from Unst later this year.

HyImpulse CEO Mario Kobald said: “We have run a series of different short and long tests on our hybrid motor to qualify it for the first launch of our sounding rocket, and are pleased to say that they have worked well. This follows a first round of testing in Germany.

“We are using solid fuel – basically candlewax – that is easy to handle and really cheap, with a further major advantage that there can be no hazardous accidents during shipping and prior to testing and operations.

“Only during the testing itself did we introduce a liquid oxidiser and heat to make the motor fire. This has been a big step forward in proving that the technology is working.

“We have had really good support from the companies here, from Ocean Kinetics, Streamline, Shetland Power Tools and Nordri. They have been very professional and provided all of what we asked for – very good co-operation.”

The company plans to carry out further engine testing in July, and proposes to launch a sounding rocket in the autumn.

Shetland Space Centre CEO Frank Strang said: “It has been a tremendously exciting two weeks at Scatsta, with the first rocket engine testing marking a major milestone in the development of the space industry in Shetland.

“There is lots more to come, from HyImpulse and our other partners including Lockheed Martin, ahead of the first planned vertical rocket launch from Unst next year.

“Congratulations both to Mario and his team for their successes and a massive thanks to Shetland Islands Council and the local companies who have supported this operation. The can-do attitude and teamwork on display bode well for Shetland’s future as the home of UK launch.”

Managing director of Ocean Kinetics, John Henderson, said: “We were delighted to be approached by Shetland Space Centre to work on this project for Hylmpulse Technologies.

“We placed and secured the engine into its test location and carried out site services including inspection and testing of the pipework.

“Although we are very familiar with delivering bespoke projects, this is, of course, a completely new sector for Ocean Kinetics. The space economy is a fascinating one, and certainly an area for which our services are particularly suited, and we very much look forward to being involved in it, as it evolves.”

Will Rodger, Operations Supervisor for Streamline, said: “Good planning and co-ordination with the teams at HyImpulse and Streamline led to a well-executed movement of their test equipment direct from Germany to Shetland, as part of this exciting first campaign with Shetland Space Centre.

“We look forward to supporting the team and project further with our services both in Shetland and Europe/Worldwide. This is a great example of how Streamline work collaboratively with many partners to ensure goods are shipped on schedule to meet customer requirements.”